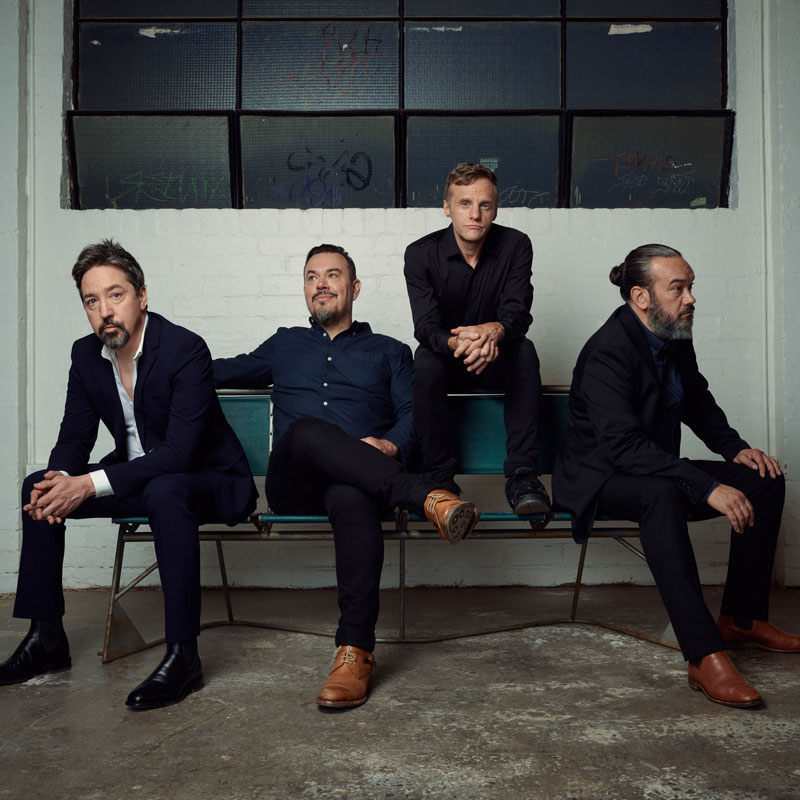 If anger is an energy, then Old Gods – Shihad’s 10th studio album since forming in Wellington in 1988 – could singlehandedly power the New Zealand city for a year.

Indeed if you thought 2014’s seething, pummelling FVEY was peak fury, you ain’t heard nothin’ yet.

“I don’t think FVEY even compares with the anger I feel now with what’s going on,” says frontman Jon Toogood. “I wrote that before Trump was in power. There’s been some real dark shit happen, worse than what I could have imagined.”

It did, however, take some time for the singer to find his voice. As a unit Shihad may have spent the past few years writing the kind of lurching, bulldozing riffs they’ve specialised in for more than three decades – of the blistering “Little Demons” Toogood quips: “It’s one of those riffs where if I’d heard it I’d have gone, I wish I’d written that. And luckily, we wrote it!” – but the frontman wasn’t sure of what he had to say.

“My wife and I’d had two kids and it totally flipped everything on its head,” he offers. “Ever since our first EP, Devolve [1990], I’ve been going fucking hard – it’s all about music. And then along came two kids and it’s like, oh, actually it’s about these two kids.

“It meant I didn’t have any room or desire to write lyrics for a long time, yet we were writing music that was super powerful and super to the point.”

Whether he realised it or not, though, Toogood’s creative tank was slowly filling.

A new parent and convert to Islam, recently married to a Sudanese woman, he’d begun to see perspectives other than those with which he’d been raised. Add in the soul searching that came with the COVID pandemic and Black Lives Matter movement, and the band’s collective disgust at the rise of Conservative politicians such as Donald Trump and Boris Johnson, and Toogood took on a new understanding of his place in the world as a privileged white male.

“My whole consciousness changed. I haven’t been able to see the world like I used to. And all of this was feeding into, oh right, we’ve written the soundtrack, and this is what I’m going to talk about. I’m going to talk about the fact that I don’t want a future where white supremacy reigns supreme, especially with my bi-racial children. I don’t want to see leaders like Trump hold sway over a big portion of the population on the planet. Cos it’s not gonna end well.”

The result is Old Gods, an album that states its intent from the moment the crushing, grinding riff of opener “Tear Down Those Names” explodes to life. Toogood uses the song as a platform to address the tumbling of existing cultural structures, such as statues celebrating slave traders: “There’s been a change in the weather/We’re witnessing history/Throwing thieves in the river/We’re banishing bigotry”.

One song later and he’s urging the killing of “old gods” in the title-track, while referencing the storming of the Capitol in Washington DC, the generational trauma suffered by First Nations people at the hands of colonialism, the rise of Donald Trump and his cronies, and his disgust at those in power who supported the former US President (key lyric: “You put your money on a pig dressed up as a man”).

“I know it’s just rock’n’roll at the end of the day, but it’s my artform, and I’ve got a really fucking powerful band to play with, making powerful music, so I’m going to write about that shit,” says the singer.

Elsewhere Toogood rages against the “millionaires working for billionaires” in “the hellscape” of conservative talk radio on “Mink Coat” (“You’ve got blood on your mink coat”); the legitimisation of racism in “Empire Falling” (“That’s the sound of an empire falling”); and the radicalisation of a generation fuelled by misinformation and conspiracy theories on Facebook in “Just Like You”. There is room for a little light-heartedness (“The Hill Song” is “about Israel Falou’s Instagram account”), even if there’s no missing Toogood’s swipe at bigotry.

Such vitriol would, of course, amount to nothing were it not backed by the sonic apocalypse created by Toogood, drummer Tom Larkin, guitarist Phil Knight and bassist Karl Kippenberger. As a unit their achievements are undeniable – five of Shihad’s albums have hit Number One in New Zealand (The General Electric (1999), Pacifier (2002), Beautiful Machine (2008), Ignite (2010) and 2014’s FVEY), while their recent cover of Split Enz’s “I Got You” topped the NZ Rock Radio charts for a staggering 26 weeks; in Australia The General Electric and Pacifier LPs are both certified Gold, while FVEY debuted in the Top 10. There may be an unmistakable heaviness to Old Gods, but it’s offset by a dexterity and musical telepathy that comes from decades of experience playing together.

With the group exploiting the same dropped-G tuning on Old Gods that they first utilised on FVEY, they also emulated the writing process for that album, getting together in focused two-week bursts across a period of three years.

“It was all very instinctual, and that’s been a really strong point,” says Larkin. “Not to deliberate, not to think, not to give it any pre-thought. You just literally jam, and you record it.”

Key to helping them mould the ideas from those sessions into songs was producer Adam Spark. Best known as guitarist and songwriter with multi-platinum Australian band Birds Of Tokyo, his history as a metalhead combined with his ear for a pop hook immediately marked him as a kindred spirit.

“We wanted to take the aesthetic, the depth and energy and heaviness and forceful intent we discovered in the FVEY context but make it more colourful,” says Larkin. “We could actually make it less bleak while not removing that kind of intensity. Adam has a natural talent for that.”

When Old Gods comes to a pummelling, convulsing conclusion with “The Wreckage”, what may at first sound like another violent comment on the state of the world (“When all your heroes have been convicted/And you still can’t handle the truth”) in fact brings things to a close on an optimistic note.

“It’s about sifting through the wreckage, but out of those things some things can grow,” says Toogood. “I’m not devoid of hope. The record’s not devoid of hope. It’s more like, ‘Okay, we can’t be passive observers to the world falling apart. We’ve actually got to fucking do something.’”

Ask Toogood if the album is a call to arms, and he nods.

“Fucking A it is. It’s a call to arms, but it’s also a fuck you to people who think they’re getting away with robbing the bank. I can see you.

“It’s very cathartic, this record,” he adds. “But it’s weirdly fun to listen to at the same time. It’s the first album in a long time where there’s nothing I disagree with.”